The night had been long. The night had been cold. Robbers and thieves, heartbreaks and murderers, angels and behemoths had all roamed this particular night The northern winds had been strong. The whispers in the night had been loud and clear. Houses were visibly in shade and the cold had forced the moles out of their shelters many of whom could be seen loitering the streets. From up above his window, the venetians could be seen starting to recover. Traders were taking goods to the markets and the elegant mothers were making their way to the theatres to gossip about the night. Sleepy children were traumatized by the storm as they loitered the street.

However, this morning, unlike the previous night was gentle. It was calm and sombre. It was subtle. As the sun rose, it shone an exquisite gold over Venice. It peeped through the ventilations of the tiny little apartments forming straight patterns of yellowish light that illuminated the antique portraits and furniture in them. In his apartment, it penetrated the tiny holes  all the way to a little bed in the corner. It shone patches of goldish light upon a tiny humanly figure folded in the white sheets. As he stood, he couldn’t help but stare at her as she slept. Her somewhat long dark brown hair covered her innocent tiny face. As she slept, even heavens angels couldn’t help but watch one of their own sleep. Her heart was a garden of roses. The flame in her eyes, the nature of her character were all beyond the descriptions of my pen. Her rosy cheeks seemed vulnerable and yet tempting to touch.

As the intensity of the sun increased, she kept moving in bed until she finally woke. The morning sun rested upon her cheekbones revealing yet another masterpiece. Her eyes remained closed and so did this scene. Those who have looked in those eyes before could tell you that there exists a whole other galaxy in there, one whose stars have no faults. One that consumes the darkest of demons. As a witness to that galaxy, It made me want to grow, to become the best version of me. The stars in those eyes were worth waiting for, even for 1000 summers. Anyway, back to the story, as he stared down at her,  tears run down his eyes. For Adeline belonged to someone else and he knew that. And yet she was all he could ever think about. He was a soldier and yet was scared. There had been rumour that the eastern armies were within miles from Venice. For that reason, he wished this scene would never end. He wished he could watch her sleep for eternity. To be honest, I too wish I could tell you all about it forever. I just can’t. For her existence was a work of art. You just had to be there to see it.

Well, as Adelina slowly woke, as Venice remembered the storm of yesterday and as this particular morning dawned upon us all, the 16th of September, 1762 went down in the annals of history as the day beauty and art fell upon the surface of the earth. 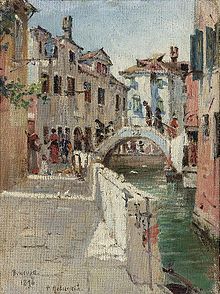 I write to get a better understanding of the world, why we feel the way we feel and how we can channel our emotions to achieve greater stories View more posts